So you want to be a Drag Race Photographer? by Steve Reyes

You know its been about fifty-seven years since I first embarked on my five-decade adventure as a drag racing photographer. To this day I can still remember the advice or tip that was given to me by Fremont Drag Strip manager Ron Lawrence. Lawrence looked at a fifteen-year-old me and said “Kid, don’t get run over” and that was the words of wisdom that I lived by early in my photographic career. Back when I started there were no guard rails or concrete walls. It was wide open spaces of grass or asphalt that the photographer shared with race cars. You couldn’t stand around with your thumb in your rear, paying attention was paramount to your health. There were plenty of moments when angels were watching over me.

Of course, everything has changed so much from when I stumbled around a dark room processing my own black and white film. Color slide film like Kodachrome and Ecktachrome were sent to local lab to be processed, the waiting to see your images could be almost painful. Now, a computer shaped like a 35mm camera with a big dollar lens is the norm. Darkrooms are a piece of history and laptop pc’s have taken over. Heck, camera’s in most smart phones these days can out do my old 35 mm cameras. Mastering one of these modern-day point and shoot “35mm” cameras can be a bit tricky but if you have the skill to compose your images, then most can turn out some nice images. Just always remember what you see through the view finder is what you get. The difference between a person that takes pictures and a true photographer is the passion to capture that perfect image and that perfect image and he or she isn’t satisfied with a ho hum image.

Everyone has to start somewhere so I would go to my local drag strip and talk with the manager. One of the biggest changes in the last five decades would be the race tracks and rules concerning still photographers. Your local track may not even allow people past the starting line because their insurance provider won’t allow it. Just grabbing your camera and running out in the so-called “photo area” is a quick way to get thrown out. This is a good place to find out all the ins and outs of shooting photographs at a drag race without the pressure of the larger races. If you have big dreams of photographing race cars on the NHRA national circuit, that is a whole new can of worms. Getting a photo pass to one of their events isn’t easy. Since TV rules the media, the lowly still photographer is considered a necessary evil. Very strict rules must be followed by still photographers or you will be removed. No ladders, even two step ladders are out. No use of any flash units and the latest, photographers must kneel for the first 100 feet of the race track. Unfortunately, the result is that images tend to be all the same because they are all shot at essentially the same angle and you cannot really get the cars racing each other from the vantage point kneeling next to the track. Still want to shoot race cars? Bring your knee pads and long lenses. Remember you can always venture to the grandstands at the finish line and wait for carnage at 1000 feet. Oh yeah, you will be going head to head with some of the best ever drag racing.

Photographers like Rick Shute, Ron Lewis, Gary Nastase, Roger Richards and of course, Mark Ribilas. Get in their way and things could get ugly for a “newbie”. If you would like more of a kick back race/car show to waste lots of pixels, then the two Hot Rod Reunion’s that NHRA holds yearly is your cup of tea. The first is held in Beech Bend Park in Bowling Green, Kentucky, and will have a lot of really great photo ops. You won’t need a photo pass to score nice images. The California Hot Rod Reunion in Bakersfield is a classic event. This event is packed with rolling works of art (a.k.a. restored race cars). Cackle cars, retro funny cars, retro fuel altered, and more will be at this event and it is like riding a time machine back to the golden years of drag racing. I have never been one to tell anyone how to photograph race cars. Heck, if you use common sense and study other photographer’s work, you will develop your own style and remember to have fun with your hand-held computer. LOL Yes, no guard rails and it was open season on photographers. That is photographer Rich Welch capturing an image of Roger Harrington and his AA/FD in 1966. Yes, that is me hanging out at the Xmas tree to photograph the Whipple and McCulloch AA/FC in 1970. Kneeling on the race track was not a problem in 1966. 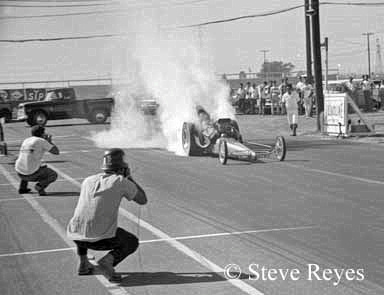 no 1 c 1966 fremont the shark car with photogs copy 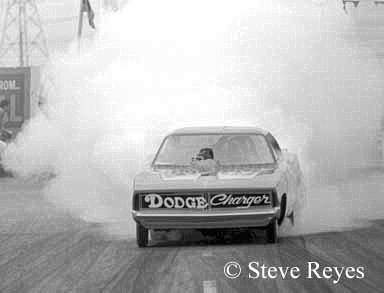 no 2 a Chi town Burnout at Fremont copy I went anywhere and everywhere on the drag strip to get a different image. The Chi-town Hustler was taken in 1970 and the Hairy Canary in 1967. Try this today and you would be arrested. The insurance companies have no humor. no 3 a top fuel and photographers at scottsdale no 3 b sherm gunn aafc hits guardrail at pomona copy

Scottsdale, Arizona in 1972 without guardrails; Pomona, California in 1986 with guard rails. 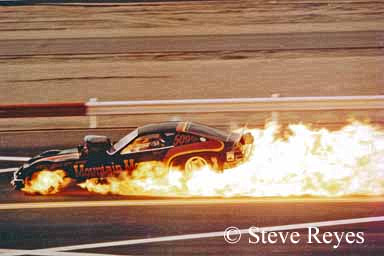 Hanging out at the finish line with an 80-200mm lens can produce some interesting images. Good thing is that you don’t need a photo pass. The bad thing is you are mixed with spectator’s who will stand in front of you or stick their arms up in front of you. The higher in the grandstand the better. 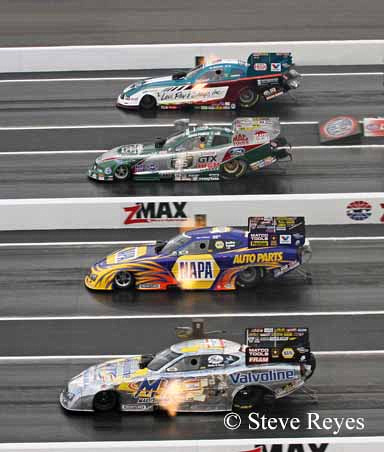 no 5 a beckman capps force and wilkersen copy no 5 b gilbertson aafc

More from the spectator grandstands, just be patient and the images will come to you. 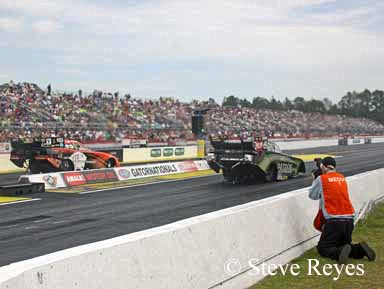 no 6 a andy wilsheer at work copy no 6 b step ladders no 6 c top fuel side by side

Photographer Andy Wilsheer shows the new position required by NHRA for all still photographers that shoot the first 100 or so feet. No more ladders big or small. The kneeling rule takes away cool two car race photos. A side note about Andy, he is one of a handful of drag racing photographers seriously injured on the job. He was shooting parachute photos in the shut down area when an A/FD lost a weight bar from the front of the car. It struck him and seriously broke one of his legs. It’s not usually the car that will get you, it is the flying parts. no 7 a 1973 columbus ohio ramchargers and photographers copy 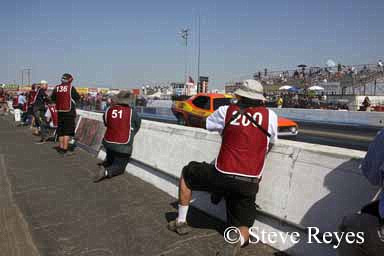 no 7 b crowded photographers

Yeah, it can get a bit crowded along the guardrail or guardwall. With the new rules for still photographers, it gets even more crowded. 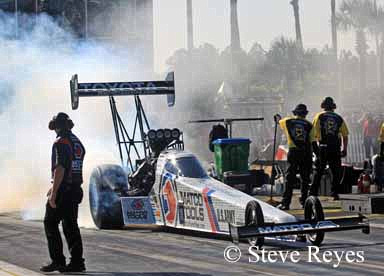 no 8 b wandering crew person

Let’s say you scored your first ever NHRA National photo pass. You head to the assigned photo area and get ready to shoot. Alas, you now must put up with the wandering crew members and there is nothing you can do about it but shoot around them. no 9 a wiebe cowl 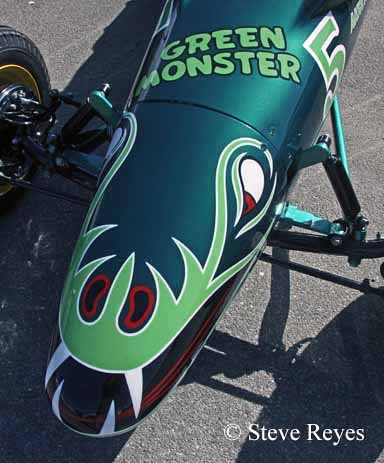 no 9 b green monster nose If you get the chance to attend either one of the NHRA Hot Rod Reunion’s it is a great art show and a trip back in time to the golden years of drag racing. 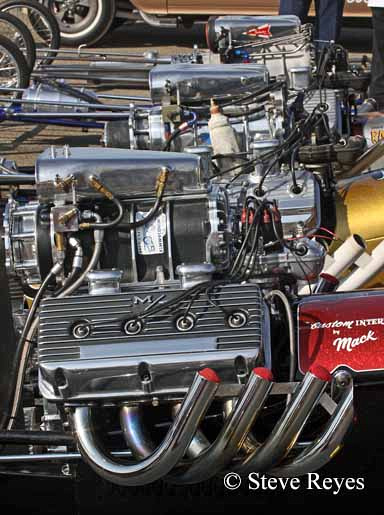 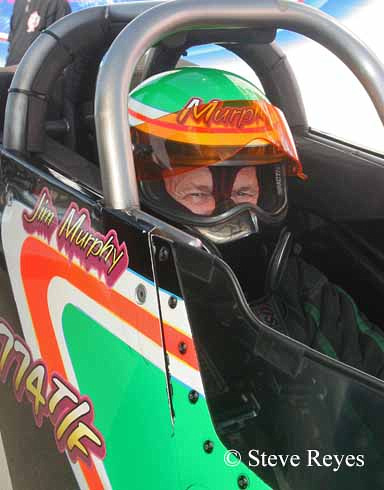 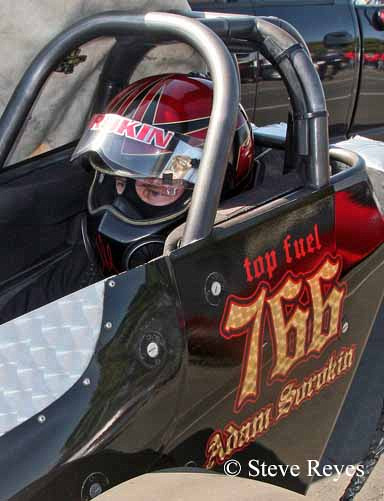 no 11 b adam sorokin copy Driver studies with a long lens are nice, Jim Murphy and Adam Sorokin are nice examples but Mendy Fry in the Bomb Squad AA/FC was flash filled with a 28mm wide angle lens. no 12 b steve harwood vs

At the California Hot Rod Reunion in Bakersfield, drag racing is two cars doing battle down the 1320. The big problem at Bakersfield is the huge sign boards in the middle of the track right off the starting line. Well, I like two car, side by side photos, and so do the racers. The best way to shoot two car race pix without the sign board is to slap on a wide-angle lens and walk down past the sign boards. It does take some panning skill but with practice you can bet an image like the one of Steve Harwood’s AA/FD racing the Bartone Brothers AA/FD. 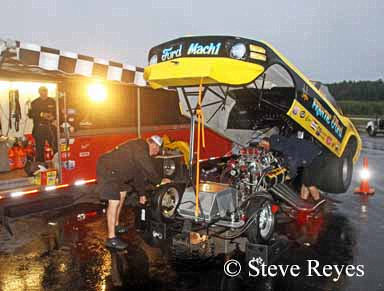 no 13 frantic ford aafc in the rain

So you are at a race and it begins to rain, not hard, but enough to make it interesting. Armed with a towel to protect the camera and a wide-angle lens, I captured the Frantic Ford guys working in the rain at Epping, New Hampshire. I like the photo because it is different. 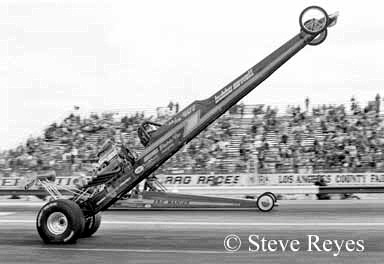 Just like the Boy Scouts, photographers must be prepared for anything happening on the race surface. Not paying attention can cost you the “one of a kind” photo. This photo was shot during a “lunch break” at Pomona. I was the only photographer on Bubba Sewell’s side when he put his TAD on its back wheels.