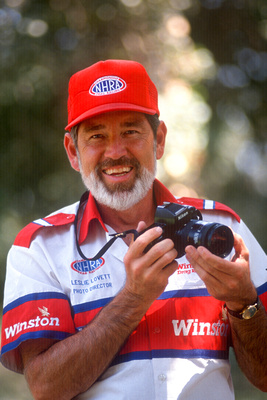 Drag racing is a highly visual sport: gleaming chrome and shiny colors frame engineering masterpieces that rocket flawlessly from zero to 315 mph quicker than you can read this sentence and can skitter out of control, blow up, or catch fire even quicker.

Capturing the color and glory on film requires patience, a steady hand, the right equipment, and a little luck.

National DRAGSTER Photo Editor Leslie Lovett, an award-winning photographer who has been stopping high-powered cars in their tracks for four decades, offers the following tips.

Equipment: Lovett recommends a 35mm camera and a minimum of two lenses, a medium to long zoom (such as an 85-200mm) for on-track action and pit portraits and a wide-angle (28-35mm) to cover a wider variety of pit action. Remember to bring spare batteries and enough memory cards to get you through the day.

Lovett recommends shooting at 335 iso or higher, which lets you use the high shutter speeds necessary to stop the roaring beasts in action. Most on-track action requires a shutter speed of 1/500-second. Anything slower means the photographer must do a fluid pan -- nice for a speed effect, but tough to do -- and anything faster freezes the car excessively and makes it appear to be static rather than in motion.

Don't shoot with your camera in automatic-exposure mod. Bright flashes -- either from an exploding engine or the sun's glare -- will trick the camera into under-exposing the photo. Pick the spot on the track that you're going to shoot and take a meter reading there. The area, with all of the trailer canopies, also is a tough place to achieve the right exposure. Don't be tricked by light streaming from on end of the compound.

In the pits and on the track, wait for the moment. Burning through a memory card because you camera has a motor drive is not an efficient way to capture and image. The close pit access allowed by NHRA permits fans to capture even the facial expressions of the drivers and crewmenbers. As you do when you watch the race, move around the stands and enjoy the different vantage points and the great photo opportunities that they offer.

And keep that trigger finger ready!